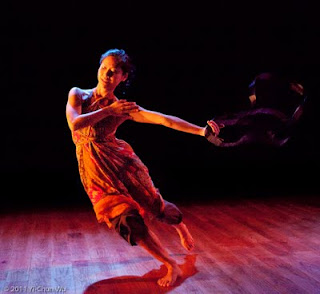 An Interview with Alaine Handa of A.H. Dance Company
By Lucy Rupert

LR: First could you tell me a bit about your path in the dance field?

AH: I started dancing at 4 in Indonesia. I remember when I was 8 I played the part of a rice grain. I carried a grain of rice and we swayed from one side of the stage to the other whenever a magical bird passed us. When we moved to Singapore I became interested in tap and jazz and took up figure skating, training long hours until I broke my ankle and it was recommended that I take ballet again to strengthen my ankle. The following year I started choreographing for the dance shows at school and by the end of high school, I knew that I wanted to major in dance at college, to pursue choreography and start my own dance company. I graduated from UCLA with a degree in World Arts & Cultures with a Dance Studies Concentration. We approached dance and dance-making as a way to bring change in the world.

LR: How did you get to the point of creating Chameleon?

AH: When I first started college, I attended Pitzer College in Claremont, CA - a small college in a small town. I had quite a bit of homesickness, culture shock, and reverse culture shock when I went to visit "home" for the first time after living in Southern California. I fell into a deep depression and felt out of place all the time. I applied for a transfer to UCLA my 3rd year thinking that a change of environment will uplift my mood. During that transitional summer, I spent a lot of time with an old friend who was in Southern California. I told her what I had been feeling and she recommended that I read David C. Pollock and Ruth Van Reken's book on Third Culture Kids. She said that what I was feeling was normal and that there were others like us. That book almost immediately brought joy and tears in discovering there were others like me.

I kept a journal and wrote poetry, prose, and drew my experiences out and brought these inspirations to the studio. I wanted to embody my experiences as a way of therapy for myself at first. Then, I wanted to create a community of Third Culture Kids and a way for us to tell others our stories. I created a Livejournal and Facebook Third Culture Kids groups. The very first draft of Chameleon was part of my senior project at UCLA.

When Barack Obama was elected President --he is a Third Culture Kid and members of his cabinet were also fellow Third Culture Kids -- I knew the time was ripe to return to the project. I discovered that literature, research, and online communities have quadrupled since I started my research in 2003....

for the complete interview check out Mooney on Theatre: