The instant I entered the studio I felt very shy. Collected in one room are five dancers and the work of two choreographers who are the best of the best. Some of the hardest working artists with the ability to plumb many depths. 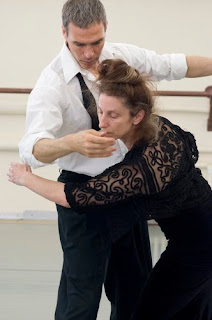 On Thursday, June 20th I was very lucky to be invited in to rehearsal runs of Cloud 9/7e Ciel’s works by Tedd Robinson and Susie Burpee. When I arrived the dancers – Sylvie Bouchard, Karen Kaeja, Michael Sean Marye, Claudia Moore and Ron Stewart – were rehearsing Tedd Robinson’s work, which at that moment was untitled.

(all photos by Omer Yukseker) 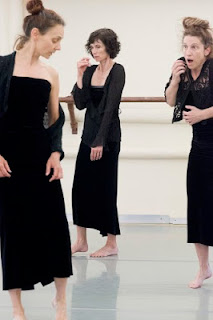 Let me summarize my admiration:


Within seconds of beginning to rehearse an intricate and wild section of Tedd’s work they all dropped in deeply – breathtaking. They are running this section for timing and spacing and just plain remembering what comes next but they automatically fall into really inhabiting the work at the cellular and psychological, not purely mechanical, levels.

I am struck by the cheekbones and noses of this cast. It might be exhaustion that causes such relaxation that the edges of their faces rise to the surface  -- but I actually believe it is confidence, an inherent self-confidence to live inside the work in whatever state of rehearsal it is in, to be there, wherever there is….and to enjoy it.

There are ecstatic moments for dancers and watchers alike when the line is blurred between confusion created by Tedd’s world and confusion within the real people figuring it out. There are smiles and laughs and gaffs that make me twitch…was that a mistake, was that a planned response? I don’t really care. It is delightful.

In watching this piece, the wonders of Tedd’s quirky, quick and precise world and the wonders of this impressive cast actuating it, I see ripening performers --a more luxurious variation on that word ‘mature’ that can call to mind slacks and powder foundation, botox  and stiff upper lips: things that don't apply here. These are performers not afraid to look themselves in the eye through the mirror as they rehearse, performers who are instinctually there for each other without having danced this work together before. I see, and am elated by, my potential future as a dancer. I see how much further there is to go. I want to go there too.

Yet while watching the run of the full work, which is thoughtful and raccous, at moments I feel I am watching a ship full of passengers without their sealegs. I do not have my usual desire to dance it instead of watch it. I am so fascinated by Tedd’s world and its little earthquakes that the desirous part of my brain is muted.

Strangely but perhaps not coincidentally, I experienced this shut down of the wanting-to-dance-the-work-instead-of-watch-it impulse one other time in recent years. When I first saw Susie Burpee’s trio for Sylvie Bouchard, Karen Kaeja and Claudia Moore at Older and Reckless in 2011.

Susie’s trio is the other half of Cloud 9/7e Ciel’s program which opens Thursday June 27th at the Tank House Theatre in the Young Centre. And once Tedd’s tripping, spilling, scenting world comes to a close, I get to watch a run of the expanded, deepened version of Susie’s work.

Since I didn’t get to say it before, my admiration for Susie is, among other things, the breadth of her imagination and the way her choreography possesses simultaneous play and exceedingly-well-rehearsedness.

The music for this work is deceptive and expansive, it folds in on itself and echoes at once. It is a frequently used cello partita by Bach, but Bach at his best leaves choreographers and musicians alike much room for invention and freshness. 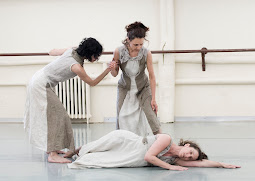 From the start, the responsiveness between the three women, whether they can see each other or not, seems to curve and bend time and space. Linearity is not possible. Not physically nor narratively. There are more folds of space between Sylvie, Claudia and Karen than we can see with the naked eye.

As in Tedd’s piece, there is falling, dizziness, but with an overriding individuality sometimes carved like a woodblock for printmaking – intricate and unique and solid.
Three women in a work can easily be stereotyped into a feminine support structure, the trinity of maiden, woman and crone – but you can’t go there with this work. None fits these three labels – they are too beautiful, too luscious, too fragile, too strong, and ageless. 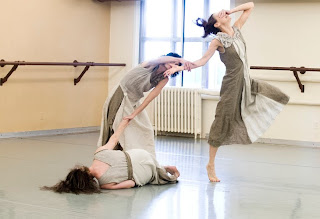 I see three small, lithe women who can take up hordes of space easily. Voraciously and speedily dancing the material they are given. What they do as dancers is mirrored by what they are doing as producers: bravely concocting a program that is a little insane and a little heartbreaking and oh-so-watchable.