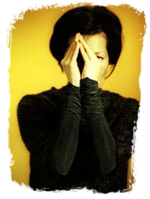 If you are following contemporary dance in Canada and don't know Denise Fujiwara you may have been living under a rock. This woman has been a force within the dance community for over 35 years. She started as a gymnast, as part of the Canadian rhythmic gymnastics team, graduated from York University's dance program, founded T.I.D.E. (Toronto Independent Dance Enterprise) and went on to cement her choreographic and performance career through Fujiwara Dance Inventions. She has been mentored by the best and is one of the best mentors herself.

Here are just a few burning questions answered by Denise.

What made you want to try EUNOIA as a dance/performance work?

I got the idea to use a piece of text as a score for a dance work and pretty immediately thought of Eunoia.  Robert Lepage, the great theatre artist advises, “Start with a juicy fruit.”  Eunoia is juicy.

In creating his book of poetry, Bök gave himself a major constraint, the use of only one vowel per chapter.  This device is transparent and the audience can see and delight in the creativity and intelligence the author employed in the writing.  The content ranges from the fanciful, to the serious, to a retelling of the Iliad, to smut, to literary criticism.  Constraints provide wonderful parameters for creativity.

The specificity and detail in the material was a wonderful challenge to create from.  We made parallel constraints to create the choreography, video, music and costumes that relate to the poem and expand it into an alternate world of performance.  Bök set the bar very high.

What is the greatest challenge --because  I'm sure there are dozens and dozens -- of creating this work?

The greatest challenge is working within the constraints.  Christian set the vowel constraints and they were adapted to the choreography.  I decided we would initiate movement from vowel-specific body parts, and that we would use the verbs as sources for the movement invention.

As well, the other collaborators, Phil Strong, the composer and the video designer, Justin Stephenson adopted constraints in their media, which effected the choreography, the performers and the work as a whole.

At first we all thought that our constraints might get in the way and make the creation of a good work impossible, but then we all found that they pushed us to create from different places and we found fresh new solutions.

Do you have a favourite poem from EUNOIA?


I love many of them.  They are by turns irreverent, witty, silly, profound, dirty and delightful.  I think the first E poem is important because it gives the thesis of the book.

What has been your relationship to words/text in your past work?

I started working with text and spoken word in the early 1980’s.  When I worked with T.I.D.E., we experimented with original and found text over a period of 10 years.  In the 90’s and for the next 15 years I was mostly mute.  I decided that using text and spoken word was an easy out as a way for the choreographer to create meaning in dance.  I became really interested in trying to discover what was specifically possible to communicate with the body through movement without the help of language.  This was the period where I immersed myself in Butoh.

Butoh works from a different paradigm and in a way, I learned a new language in Butoh.  In 2007 we created a danced adaptation of Sartre’s play, No Exit.  In the play, 3 people sit around in a locked room and talk. In the dance, the 3 people, (Sasha Ivanochko, Hope Terry and Miko Sobreira) move with metaphorically sourced movement that is incredibly specific, non-narrative, and yet, tells the story.  I studied that text long and hard, and developed a deep appreciation for the play.

After that I thought it would be a challenge to use text as a score like one might use music.  I chose Eunoia, even though, at the time I had no idea how to actually realize the book in dance.  That seemed a challenge enough, but then Phil Strong, the composer, laid down the constraint that all of the text should be spoken live by the dancers.  That put a whole new spin on the challenge and that’s when I brought Gerry Trentham onto the team to act as Voice Director for the work.  He’s one of the core teachers for Canada’s Voice Intensive as well as being a hugely experienced dancer and choreographer.

How do you think creating EUNOIA will influence or inform future creations?

First of all, creating Eunoia has taught me how strict and scary constraints can push creativity.  The level of rigour involved in this work is very dense and very satisfying.   It has set the bar higher.

Secondly, the performers, Sylvie Bouchard, Claudia Moore, Lucy Rupert, Miko Sobreira, Hope Terry, Gerry Trentham, and understudy/rehearsal assistant Lacey Smith, all trained in voice, butoh for this work, and contributed their own particular skills as performers. They astounded me with their ability to assimilate and perform the very specific ideas, dance styles, very difficult text, improvise, do set choreography, using Butoh and Freeing the Natural Voice principles.  They have also set the bar at a new very high level.

Thirdly, it has taught me how to work on a larger scale.  The team of collaborators who created the music, video design, lighting and costume design have been a pleasure to work with, enriched the dance and make it even more engaging in so many delightful ways.

When I proposed this large-scale work to Adina Herling, our fearless Manager, and my amazing Board, they said, ‘We have to do this!’  It has taken all of us five years, and we are now finally ready to present it.