Lacey Smith is the founder and artistic director of Dasein Dance Theatre in London, Ontario. She completed a BFA (Hons.) in Performance Dance at Ryerson University, received Dance Ontario’s Creative Partnership and was selected as one of four finalists for Les Grands Ballets Canadiens de Montreal’s first National Choreographic Competition. In addition to performing her own choreography Lacey has interpreted works by D.A. Hoskins, Andrea Nann and is an associate artist with pounds per square inch performance. 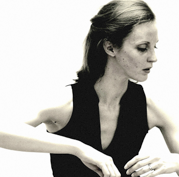 Lacey is the understudy for EUNOIA, a complex role as she is not understudying one person's part, but fragments of each performers role, as well as acting as rehearsal assistant.  She is an often unsung hero in the process of making and rehearsing EUNOIA and we thought you should know more about her and her view on this massive project.


What were your first impressions or thoughts about EUNOIA the poem and the dance project when you first got involved in Denise's process?

My first impressions of the poem…..mind boggled…
My first impressions of the project……unique and ambitious…..surreal (how did I end up in a room with all of these accomplished artists).
I often thought, I wonder where Denise is going with all of this?  It seemed and still seems extremely ambitions and challenging.  It is exciting being a part of something that is challenging our art form and forging new ground.

Well depending on how you look at it I have two roles that often feel like seven.  I am both the rehearsal assistant and the understudy (of all six roles).  So I guess my greatest challenge has been to keep perspective on my task in all of this and devise ways that I can both keep extremely accurate records of the work but also find ways to know the text and movement scores.  Sometimes this means learning one or two specific roles for one of the poems and sometimes I create my own movement within the score for other poems.  Unfortunately for me there really isn't any unison work in Eunoia.  I have resolved to the fact that it is impossible to be prepared to replace any of the six dancers so I decided that I needed to find and develop my own voice within the group and the work.  I am still trying to sell Denise on the sometimes Y role but it doesn't seem to fly:)

Yes!  "Monks who vow to do Gods work…." from chapter O and the "Dhows from Colombo…" poem.  I guess I like the O's!!!!  The vivid imagery and dramatic context is so fun to play with when speaking them.

What has been your relationship or experience with words-and-dance in the past?

Nil.  I have never worked with text in a dance project before.  The only experience I had previous to this were the few acting and voice classes I took during my studies at Ryerson.  Oh and I believe I also played Glinda in The Wiz in grade seven which required me to speak a few lines onstage and sing a song while moving about.

How do you think the 4 year process of Eunoia will inform or influence your own work in the future?

Working on this process with Denise and all of the dancers in the cast has already begun to change the way I work and has influenced me in so many ways.  The biggest change for me has been to really question the possibilities of dance and of myself as an artist.  It is giving me the confidence and skills to go into unknown territory within my own work and dig deeper into what I don't know.

Another big thing for me has been the voice work.  Working with Gerry (Trentham) and Cindy (Block) has given me more confidence in speaking but has also informed my dancing substantially.  Overall it seems that working in this process with these specific artists has made me see myself in a light I have never seen from before.  I have learned more about myself in these last four years then ever before and have discovered I have a lot more to offer then I ever imagined.  What a great gift.

mylettertotheworld said…
great interview. Wow being the understudy and rehearsal coordinator...sounds like an overwhelming bunch of handsfull. Congrats. It was awesome. Arno
March 23, 2014 at 12:12 PM