Do you know?.... Angela Blumberg 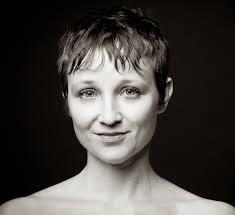 Continuing my interviews with artists collaborating on projects, I am bringing you a couple from the choreographers of the Blumberg/Norman Double Bill. I posed the same questions to both choreographers -- Angela Blumberg and Tracey Norman. Up first is Angela, an electric dancer with refined and unusual ideas in choreography and piercing body intelligence. Angela is originally from Germany, trained at the Laban Centre in London, then came to Toronto where she completed her MFA in Choreography at York University. Her choreography has travelled to the UK, Sweden and recently to Taiwan. She frequently collaborates with her partner, composer Augusto Monk.

Where do you get your ideas for new dances?
I can find inspiration in various things including literature, music, simple movement explorations, and the visual arts. What remains. [a new work premiering in the Blumberg/Norman Double Bill] for example was inspired by jewellery-like accessories that the Paperhouse Studio created for the three dancers.

When I started defining a choreographic concept I asked myself what is the reason for wearing theses accessories? What world do they belong to? And how do they make the dancers look – scary? Majestic? Embellished? Following these questions I spun a story in which the accessories became objects of desire, and the dancers’ goal to be in possession of these objects.

For Shadow, [Blumberg's second choreography in the upcoming show] on the other hand I was inspired by a movement exploration where I had worked with chairs. I was interested in developing a daily life activity such as sitting into an abstract movement phrase and then reduce it back to sitting.

My idea was to bridge the gap between narrative and abstract movements and to come up with a choreography that tells a story in an abstract way.

Obviously, the choreography has come a long way by now. I remember trying out a “chair chase” where I imagined both dancers going over and under and in between the chairs to avoid being caught by one another. I think this is when I had the idea of a shadow chasing the person who it belongs to which then became the starting point of the choreography.

How do you translate those ideas into movement? Is it instinct, planning, trial and error, a system or code of your devising?

I think it’s all of the above! There is always a good amount of trial and error, but in my case there is also an idea or plan that I try out. What helps me is working from a concept because then I can try out ideas in a fairly focused way.

For example, let’s stay with Shadow and the idea of developing daily life movements into abstract movement phrases: I know that there are tools such as repetition, tempo changes, or traveling movements that allow me to abstract a movement. So there is a system or code in place that I can draw from. But of course these systems and codes are very general and you need to keep layering information into the equation to make your phrase specific and relevant to the piece. That implies a significant amount of trial and error, and of course I did fail at some points! Due to my own technical limitations, a lack of imagination, or simply because I am doing something that I have never done before. I have never worked with chairs before and I don’t know how to say what I want to say.

And I think that it is important here that you don’t over-challenge yourself as a choreographer. The gap between what you know and what you don’t know needs to be “bridgeable” otherwise you have little chances of solving the problems that you encounter.

Another thing that is important for me when translating ideas into the physical realm is to be clear whether an idea is an inspiration or if I want it to be understood by and audience. An inspiration might only serve me as a choreographer as a stepping stone that the audience doesn’t need to be able to trace back and understand.

You and your Double Bill co-producer Tracey Norman both collaborate artistically with your domestic partners  -- what is that process like for you? How do manage or embrace the bleed between artistic work and home life?

Working with your partner has great advantages but it also comes at a price. What I value most is that my partner is as dedicated and committed to my work as I am – it’s our “baby”. The flip side is that we always talk about work and don’t go home in the evening leaving the work behind us.

You also need to understand how your partner functions and respect that to the best of your ability. For example, Augusto has a constant flow of ideas that he likes to discuss with me in order to filter the essence. I, on the other hand tend to make instant decisions without considering every option. So here we need to meet half way: While Augusto needs to narrow down his ideas, I need to be more open towards discussing and questioning my own decisions.

What made you and Tracey want to coproduce with each other?

I’ve worked with Tracey in the past and know that I can 100% rely on her as a co-producer. I know that I can delegate tasks and that she cares about my artistic work, which is important. As co-producers you need to support each other and be willing to find solutions that accommodate both your own and your partner’s artistic needs. With Tracey I have found that and I am really excited about this 2nd co-production of ours!

What has led you to this project/these works in the Double Bill? Where do you place this production or these choreographies in the evolution of your work?

I have always been interested in collaborating with artists from other disciplines and have worked most extensively with composers, musicians and writers. In the Double Bill I had the opportunity to expand my interdisciplinary collaborations and work with visual artists.

IIlustrator Luisa Stenzel made animations for Shadow, and the Paperhouse Studio made props and set designs for both pieces. I think in this production I was probably most aware that I am creating for an audience and throughout the process I tried to see Shadow and What remains from their perspective.

I was very aware of what I wanted the audience to see, and what I wanted to communicate. So I spend a lot of time on translating my ideas without the simple joy of seeing movement in space and time – lets see if it worked!