July 08, 2014
I was very lucky to work with Malgorzata Nowacka in 2004-2005 and 2006 on two separate projects. Malgorzata danced in my unfortunately titled work "that corpse you planted last year". Despite it's title it was a non-stop sextet that mirrored the imagery of T.S. Eliot's "The Wasteland" (hence the title  of the work) and I.G. Kovacic's "The Pit", with the dynamism of the six dancers. Malgorzata brought power to the choreography and humour to the rehearsal hall. I think on several occasions, she also brought chocolate.

The next year, I asked Malgorzata to make a solo piece for me on Blue Ceiling dance's first program exploring what I could do as a soloist. The resulting solo was kind of a terrifying experience -- Malgorzata's work demands strength and punch and grittiness that I don't usually associate with myself, personally or artistically; I was not sure if I could carry it off.  I was very pleased and relieved when dancers from Malgorzata's company, The Chimera Project, told me I carried it off and added my own angle to it. First lesson in my first commissioned solo: trust the choreographer. They do NOT want you to look weak in their work. 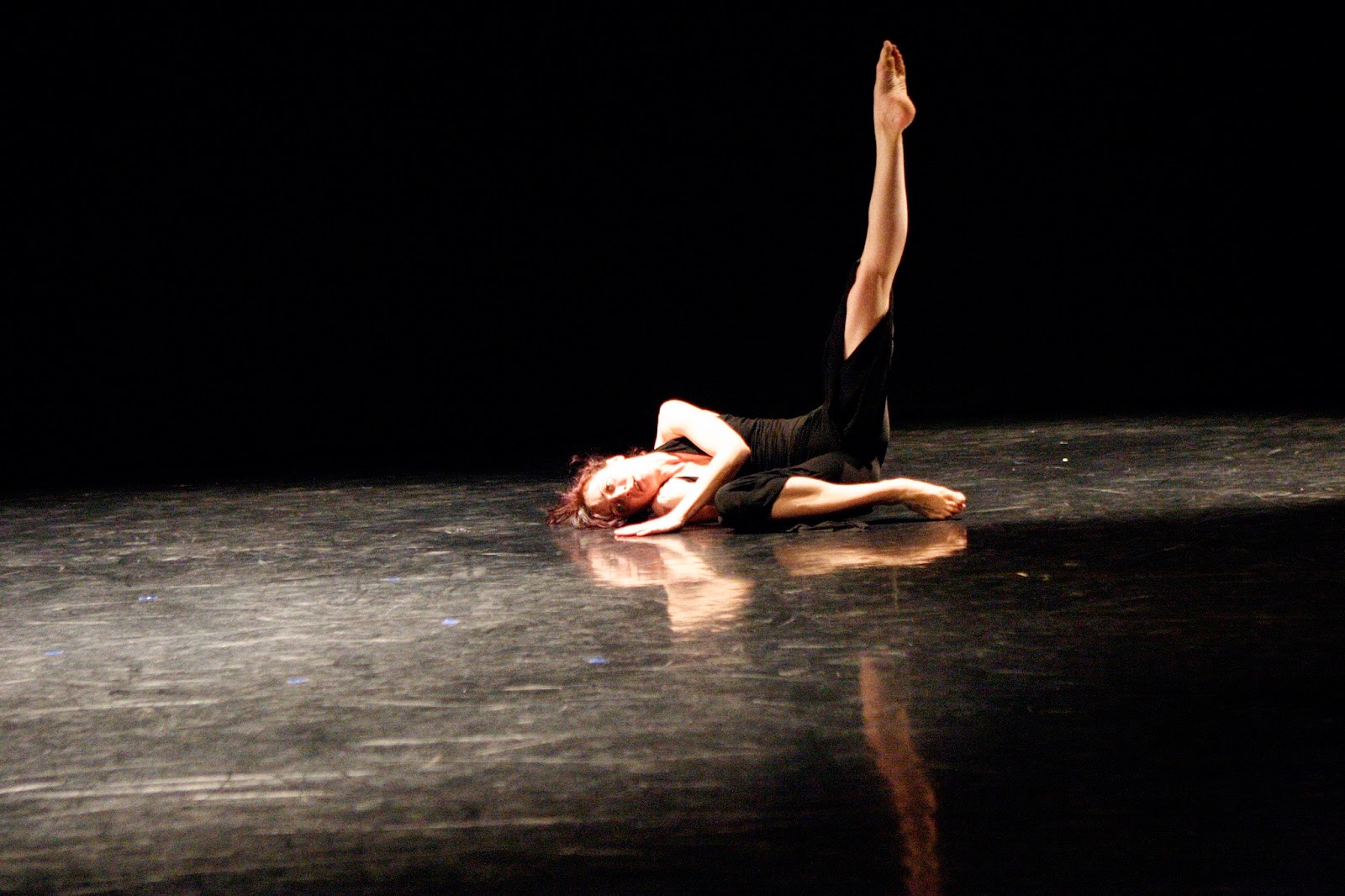 Malgorzata, if I never told you: thank you for that challenge and that lesson. It shaped things to come.

Here is Malgorzata's reflection on her time with us. She is a busy woman and I am so grateful she took the time to contribute to Blue Ceiling's 10th anniversary celebrations.

I worked with Lucy Rupert in the context of Blue Ceiling Dance a long time ago in two different contexts, as a dancer and as a choreographer.
When I think of Lucy my first thought is that she is a very defined person - long, airy and analytical. Defined in physical form, and in method of thought.

As a dancer I was part of The Corpse You Planted Last Year. The cast was comprised of myself and Lucy's many long-term collaborators. Throughout the ongoing creation process all of the long-term collaborators would refer to moments, metaphors and images of other works they were part of in the past. It was like being part of a mysterious imagination soup comprised of many things, half of which I had no reference to but which always seemed lovely and intriguing.

We spent a lot of time sprouting (?), dying and reincarnating somehow into another state. The movement was full of "wind" and we had many long pathways to complete and states to progress through.
I enjoyed the sprouting of corpse idea, and the burying, although I can't remember if Lucy was that literal. I certainly was.

Lucy also commissioned me as a choreographer to create a solo for her, which I did even though it is outside of my personal mandate to create solos. It was an exception because how can anyone say to no to Lucy? 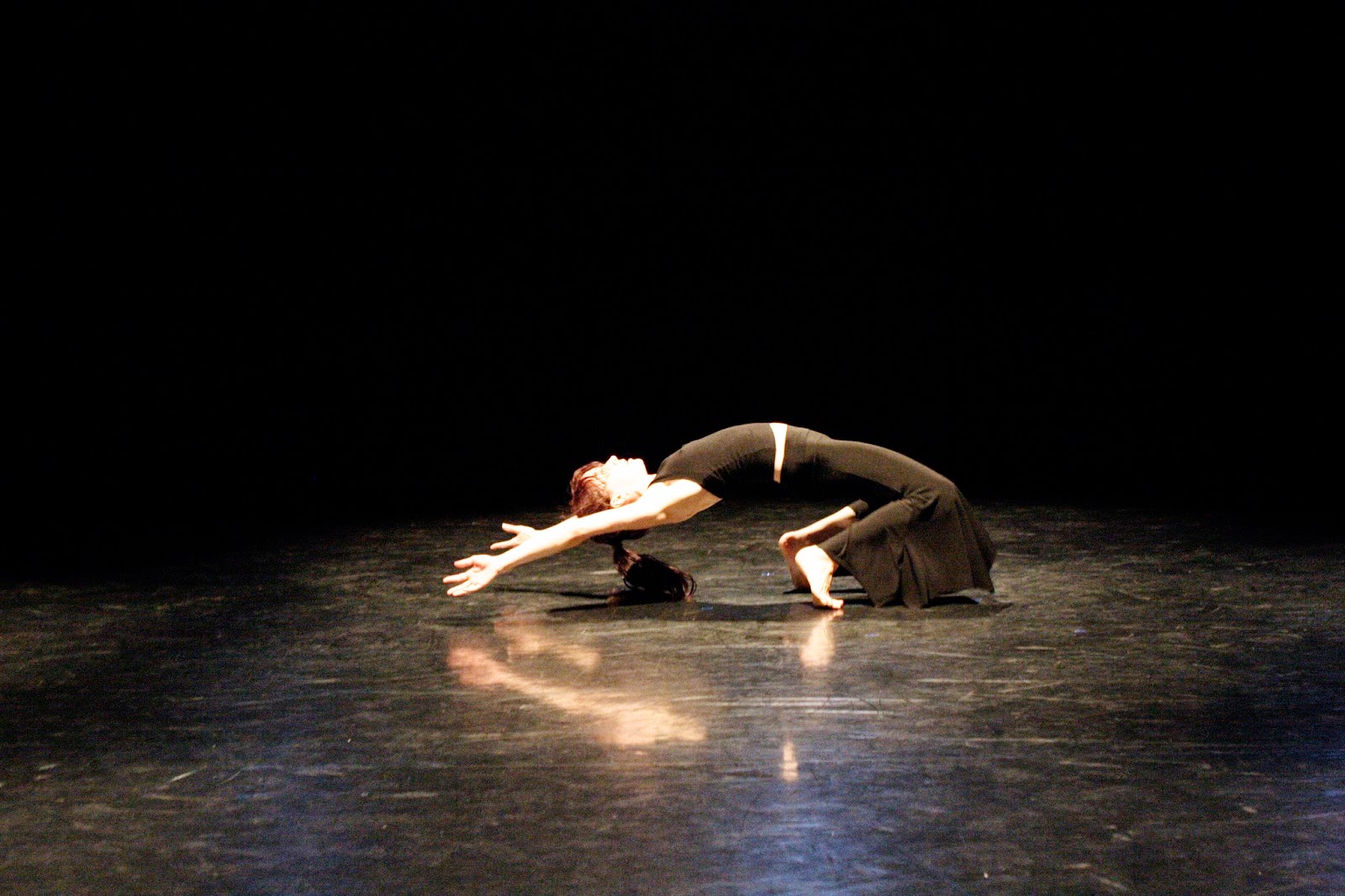 It is amazing that Blue Ceiling Dance is now 10 years old and has achieved so much.
Congratulations Lucy! I am honoured to have been part of the Blue Ceiling history. 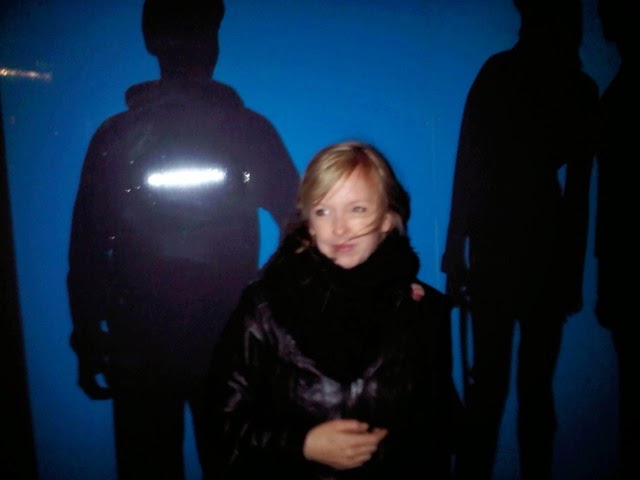 Well, this story is well known by many of my colleagues....part way through the creation process I was doing a tech rehearsal for Dance Weekend at Fleck Dance Theatre and I fell on stage, breaking both bones in my forearm. I decided to go ahead with the Radiohead show, scheduled for 6 weeks later, determined to just dance with my arm in a cast (and as it was to pass, with temporary pins holding the bones together).

When I brought this conundrum to Jenn -- who had already begun creating some crazy wonderful and powerful floor work for me (impossible to do with a broken arm) -- she considered for a couple of days, then fused the experience of the concussion with the new mess of an accident I'd had into "Just Forget It." 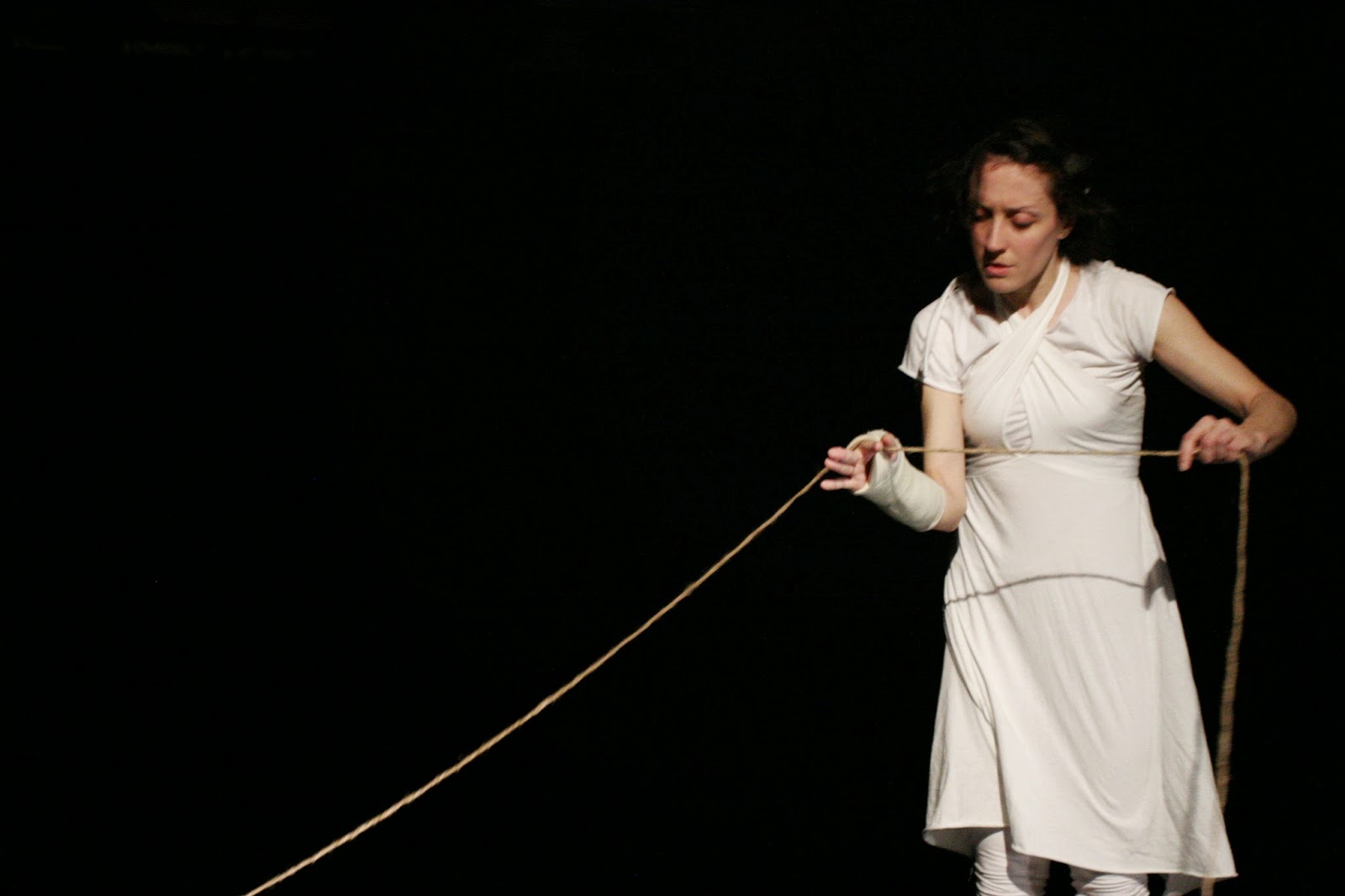 Since we premiered this solo, I've wanted to go back in the studio with Jenn in any form possible. It hasn't happened yet, but there's still lots of life left in both of us.....

Jenn contributed these lovely words for our 10th anniversary:

When Lucy called me to tell me she had broken her arm first of all I felt just terrible for her!  And then I thought, she may understandably want to cancel or put off the solo I had started creating on her. But no. She said let's figure out how to move forward, and so Lucy's injury and cast really informed what we did. We ended up wrapping various parts of her body in gauze, and the real and proposed fragility and restrictions that were created became an essential part of the work. It was amazing all that she could do anyway, cast or no cast! 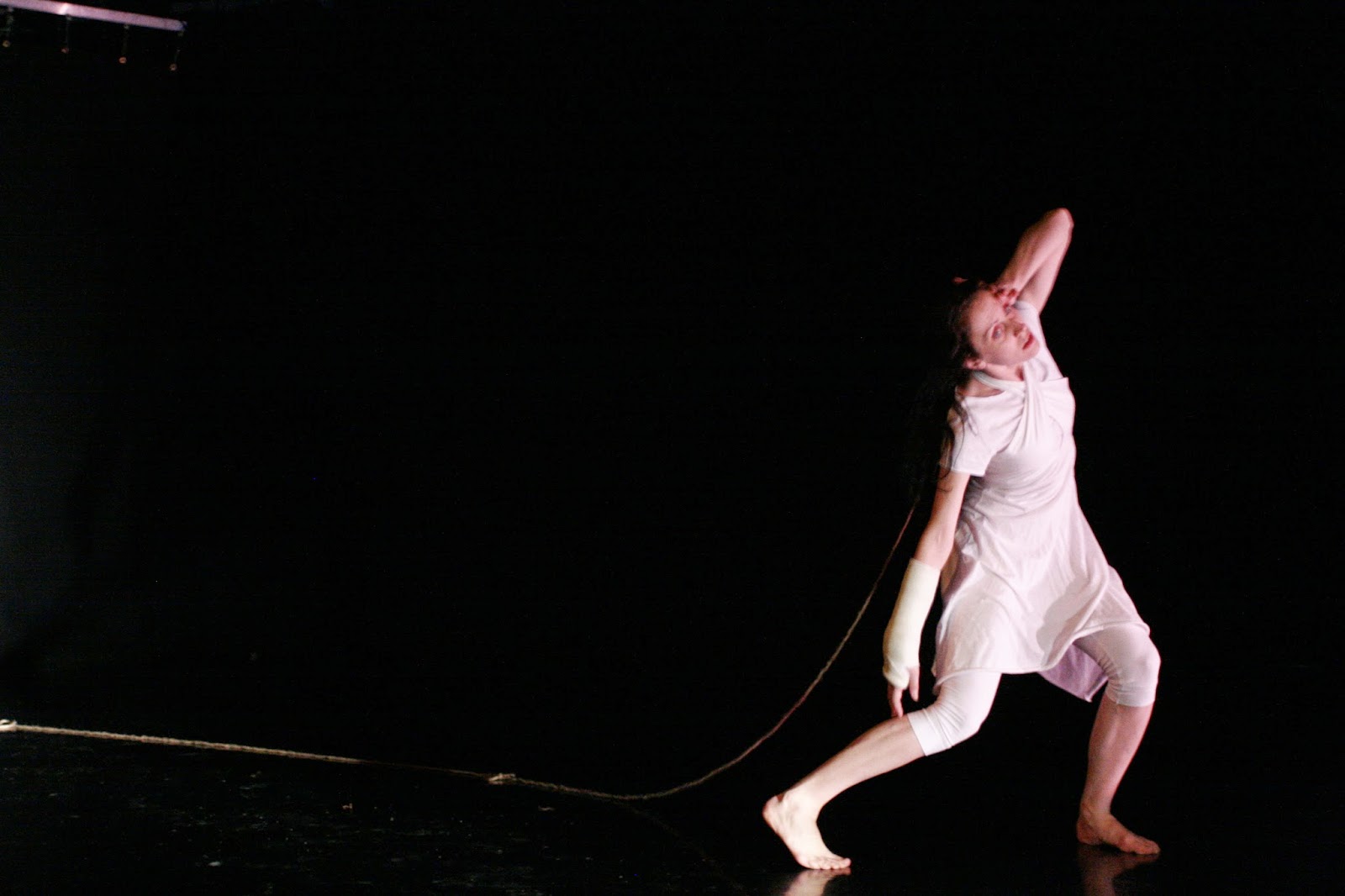 Lucy is a force and I loved creating with her and on her. I am so lucky to have been a small part of Blue Ceiling's 10 big years.

Thanks Lucy! and Congrats on your 10th. Truly a wonderful accomplishment.