November 03, 2014
Another artist in the upcoming Dance Matters Series 1: A Woman's Work is the incomparable Andrya Duff. I had the pleasure of working with Andrya for the first time last year in Theatre Rusticle's Dinner at Seven Thirty, but I have known Andrya for years and felt like I've worked with her many times. 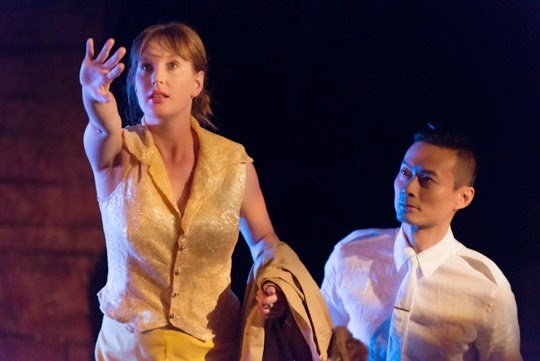 
If you know Andrya, you know she eludes definition as an artist, challenges herself and her views at every turn. She is adventurous and relentless on her own path.

Here are my questions to Andrya, a collection of curiosities that we never got to cover during our pre-rehearsal chats last year.

What is your favourite childhood memory?

I have so many! I'm extremely fortunate.

I grew up outside of St.John's, next to a farm so my days were primarily spent playing with neighborhood kids in the woods. I wasn't allowed much tv or to be inside if it was above freezing, we got pretty creative at entertaining ourselves. My house was near the ocean, not right on the shore line but fairly close. I could see Bell Island from my window and every night before going to bed I would just stare at the lights on the Island, it was so beautiful. One day my dad planted a patch of new grass in our yard, the next day I woke up to a majestic, long maned white horse eating the new grass, I remember thinking 'Magic is real!' Turns out he'd escaped from the farm down the road and my dad was poisoned that he'd chewed up the lawn.

When my brother was born my parents moved us in to town, I ran up to my new room to check out the view, a huge neon red Zellers sign. The second house is still my family home today but to me, it's never felt like home, home is still in the twinkle lights and with wild horses. I don't know if it's my favorite but it's a vibrant memory that still stirs deep nostalgia.

Why did you move to Toronto?

To get out of Newfoundland and make it big...I'm playing the long game, clearly. Toronto was supposed to be a pit stop and I think about moving on all the time, there's so much I haven't seen.

Why do you make work -- as opposed to being solely an interpreter?

First and foremost because I want to perform and I don't want to rely exclusively on others to give me that opportunity. Then because I feel it's necessary to my growth artistically and personally, it frightens the shit out of me, so I have to do it. I'm also curious to find out if I have anything to say and figure out how I would say it. I guess I'm trying to carve out a place for myself and contribute something, not to suggest that interpreters don't contribute, I don't believe that.

What is your favourite performance you’ve done to date? (and why?)

All of them. I know it seems like a cop out but I just love performing and every time I get to do it, I'm the happiest I'll be.
Biggest peeve?

How do you feel biking in the city?

I haven't been biking much lately, I've been walking everywhere. I hate my bike, I don't want to hate it but it's just so frigging heavy that riding isn't enjoyable. I'm looking into a new one. Normally I feel fantastic biking, I feel free and in control of my arrival times.

What’s the most dangerous thing you think you’ve done?

Cripes! pick one. I have moments when I think 'Wow. I'm still alive?'. So many terrible mistakes. So many. I've got bad boundaries, there was a few recklessly boozy, drug induced sex-fest years. It was really fun, great, great times. I've always been a bit put out that I exist in this decade, I think I would've looked WAY better in the late 60's early 70's but I also know the lifestyle would've killed me, so...

I remember a couple of years ago in a workshop we both took with Susie Burpee, you said you weren’t sure if you like dance anymore. How you put it was so wonderfully honest and also non-judgemental….how do you feel about dance now?
Yeesh, tough question. I remember feeling that way, it's shifted and I've accepted the harsh reality that while I love dance very much, dance doesn't love me back or doesn't love me the way I want it too and for the most part I'm ok with that but it still hurts sometimes, like all unrequited loves. The past few years have been about redefining our relationship and figuring out how we can be together in a healthy, productive way.

I started dancing because it brought me so much joy and I noticed as the years went on that I'd allowed myself to be policed by ideas around creativity, success and performance that I didn't necessarily believe, they became very corrosive to my interactions with dance and ultimately myself.

In moments I still feel frustrated that I don't fit in, I mourn the career I wish I'd had and sometimes I'm angry that I'm not more talented than I am. But then I remind myself if the point is to find genuine expression then none of us should be fitting in, as individuals our output will be different and that's the beauty of it.

No, I never got to tour with Micheal Jackson but I've been given opportunities I couldn't have imagined and I may not be the best at anything but I'm good a lot of things and failing in some regards has given me a degree of fearlessness I need to navigate all my insecurity and keep trying. It's complicated.

What would be your dream project?

You can also catch Andrya and I in:
The Stronger Variations
inspired by August Strindberg’s The Stronger