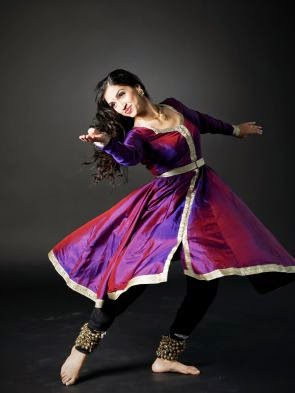 If you know Bageshree Vaze, you know these things (and if you don't know her, here's the short and sweet):

Following my line of interviews on collaborations this year, Bageshree answered a few of my questions about collaborative processes as they relate specifically to her inter-disciplinary projects, working with her husband and sources of inspiration.

h    LR: How did you come about gathering this particular cast of dancers? They are an interesting intersection of dance.
BV: I have worked over the years with dancers trained in various styles – in fact I have worked with very few professional-level Kathak and Indian classical dancers in group works. Whenever I am working on a piece, I look for dancers who are very physically-versatile, and able to interpret music and movements from cultural styles outside their normal ‘comfort zone,’ and so for the new group work ‘Paratopia,’ I auditioned dancers who were interested in working on a Kathak piece, but those who had an urban dance background.

The reason I was looking for those trained in urban dance is that having done some training and past choreography with hiphop, I have found many intersections in two aesthetics, especially in the emphasis on rhythm. My idea was to approach the new work with a Kathak rhythmic base, but to utilize non-Kathak dancers and develop choreography outside the ‘normal’ boundaries of Kathak choreography.

I am really happy with how diligently and sincerely these dancers (Danny McArthur, Daniel Gomez, and Samantha Schleese) have learned and honored Kathak aesthetics in such a short span of time, while still being adventurous and using their own technique to add to the choreography.LR: Same question regarding the composers and animator for your project. What drew you to these people?
BV: I had previously worked with Phil Strong (composer) and Elysha Poirier (animator/multimedia artist) in the 2012 production ‘Damaru/Mudra,’ and again, it was an experience in which they were able to use their artistry in a great way to interpret an Indian aesthetic.

I had heard Phil’s music for other dance works and after speaking with him after a performance, I was interested in working with him. I commissioned Phil last year to compose the music for my choreography ‘In My (Dis)Place,’ and it became an extremely collaborative process in which my own approach to choreography and composition was altered and shaped. He uses live sound very effectively to play around with the sounds of Kathak footwork and rhythmic language.

I was introduced to Elysha Poirier by Andrea Nann, and I had a great time working with Elysha in the past. She is great at translating what’s in my head into a visual reality, but she also comes up with very innovative and creative ideas. Each collaboration is an opportunity to learn and push myself to a different place, and I’ve been very lucky to work with these incredible artists. LR: You often collaborate with your musician/composer husband, Vineet.  I know live music is so integral to much of Indian dance and partnerships and chemistry are really important. Is it ever challenging working with your husband?

BV: In the case of Kathak, the choreography is based on the language of the tabla drums. How good your tabla player is will determine your level of artistry as a Kathak dancer. In terms of working with Vineet, I have learned so much from him in terms of rhythm, and every time we practise together, I continue to learn more about the drums and the vastness of tabla language, but he has also developed compositions from interacting with Kathak dance.

I try not to bring anything from our homelife into the studio, but we are also really lucky to have similar interests outside of music and dance (such as our interest in watching tennis and the kinds of movies we watch, which don’t include Bollywood!). I can’t imagine being in a relationship with someone who wasn’t as connected to what I do artistically.LR: Do you have a different approach or process between creating a traditional/classical work and a contemporary work?

BV: This question of classical vs. contemporary is one that I’ve been tackling a lot over the past few years, but I’ve now come to terms with the philosophy that there really is no distinction between the two in terms of Kathak dance creation. People think of Kathak and Indian classical dance as being traditional, but they are products of the 20th century, and in Kathak, the task is to create and re-interpret new rhythmic language on a daily level. It’s not about simply practicing repertoire pieces – while that is important for one’s learning process -- a Kathak dance artist and a tabla player are supposed to constantly create new work while adhering to underlying principles of rhythm.

When I think of dance creation, I start from my Indian aesthetic, but I like to conceive of new works in a very general sense, in that I choose to do projects based on what I’m interested in at the moment, and work with people who inspire me, regardless of their cultural background. So I don’t really see any work that I do as not being contemporary, even if I’m working within an Indian classical aesthetic.
LR: I love the idea of creating and reinterpreting on a daily basis -- This is what we do, but we don't always phrase it with such good words -- it's about "better", "more", "stronger", "faster". "Creating" and "reinterpreting" give more artistic ownership over the process, more possibility for being inspired. Which leads to my next question: what inspires you to keep dancing and creating?
BV: Dance and music are my daily realities, I don’t really have a life outside of that. I do have two children, but it’s impossible for me to not think about dance, music and new ideas. Maybe that will all end suddenly, but until then....I often think it would be nice to not think so much, but I can’t really imagine what that would be like. LR: This is a question I’m asking everyone I interview this season: could you tell me about a performance (dance or otherwise) that you witnessed that really impacted how you want to be making art and performing? who was it, when, where, why?
BV: I went to Las Vegas with my husband to celebrate our tenth anniversary and we saw Cirque du Soleil’s Michael Jackson tribute, One. While I’ve always loved his music and dancing, seeing them come to life in such a spectacular fashion made me realize what an incredible impact he had on music and dance history. I was really thrilled just to listen to his music and see his dancing hologram, and it made me marvel at how someone could still move people while not being alive – that’s the lasting power of art, and it’s an inspiration to create work with that kind of lasting value.

See her in action this week: