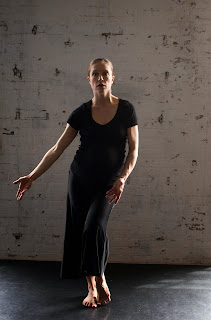 When I first moved to Toronto in 1996, Jessica Runge was one of the first dance artists I encountered. She was a blur of wonderful energy. She danced, she created, she made opportunities for other artists.  Her mind was speedy and imaginative. She seemed to live life in the same way she danced, exquisitely. I was more than a little in awe....

Almost 20 how-is-that-possible-years later, she still is one of those artists who is works tirelessly and embodies a vision where art and life cannot be addressed separately. In talking to her about her upcoming show "Possible Dances" it is clear she remains all those things I admired in her when I first met her.

She has a marvellous way of speaking about her life and her work that reveals her as a visionary -- I don't say that lightly -- without really knowing it.  "Possible Dances" incorporates the spectrum of the vision and presents to us in an intimate way.

Her show is happening, as many things are these days, at the Artscape Youngplace (180 Shaw Street), a newish undertaking of Artscape in a school built in 1914. The whole building has vibe of good, interesting, hard work going on, created by people with fresh, caffeinated energy.

The Intergalactic Arts Collective (IGAC) space in this building is a beautiful, clear, white-walled classroom, converted into a rehearsal/performance space, uncluttered and ripe with possibility. Jessica, as a member of IGAC, is making the most of it, not only rehearsing there but mounting her show there without masking the reality of the room.

"Even though it's a classroom, it's not a school." she says, "And there is a lot of natural light. Simon Rossiter (lighting designer) is merging technical minimalism with the natural lighting of the room as it shifts."

The windows of IGAC's room face west and the light travels across the room during the performance, so the passage of time is apparent. The order of the pieces in the show were determined by the type of light they embodied as time moves towards sunset.

The palpability of the passage of time is a poignant and fitting image as the initial impetus for Possible Dances emerged from the death of Jessica's step-mother.

"I wanted to find a way to let that sadness and other feelings out, like crying but fuller, to dance them with my whole body. I couldn’t hold all those things inside. I thought about love and letting go, and that sadness you have when something can never be put right, that unpleasant feeling that there has been a mistake that you can’t fix, sadness about the things that perhaps were never said that could have been said.

"At the same time, I was pregnant for the second time, my life was in the middle of letting go and getting ready, filled also with different fears,  the sometimes overwhelming or dismantling sadness that so much love and hope can somehow bring. The way a parent cries when they think about how much they love their children is so curious: why do we cry? Do we think we don’t deserve this goodness? We won’t be able to protect their beauty?

"I was letting go of a woman who had been a mother to me and knowing I was a mother and becoming a mother to another child... and living is always in between beginning and ending our lives…”assuming” the role, accepting the failures and responsibilities.

"I decided to do what was “possible" [in the original dance] to just allow and not invent anything other than what felt best and most exciting or rewarding to me."

Since then Jessica re-envisioned the work as a set of dances each with a different choreographer re-interpreting her original material. She enlisted some mighty creative women to work with her: Susie Burpee, Susanna Hood, Heidi Strauss and Deborah Dunn. Each woman is a different kind of inspiration for Jessica. Whether it was a particular performance or work of theirs she'd seen or a broader sense of each artist, Jessica notes each choreographer as artists who have moved her in significant ways.

Each choreographer re-mixes the original Possible Dance and all the original material appears over the course of the current program. One version adds a second dancer. Another involves puppetry. One she describes as 'sweet', another as 'Greek'. Jessica likens the whole program to a box with four ways to open it.

"Inside the box is the experience, each piece shows a different way of looking in at it."

Balancing rehearsals with four choreographers (two locals and two out-of-towners) is a challenge. As we spoke, Jessica was packing to get on the train for Montreal, ready to dive in again with Susanna Hood once she arrived. Add to that the demands of self-producing, being part of a collective, managing a freelance career that involves teaching and dancing for other choreographers: no easy feat. But Jessica also has two children at home ages 9 and 4. How does she manage it all?

"It doesn't always feel very manageable. There's such anxiety. Are things getting done? Is it going ok? Can I let the mess on the dining room table not bother me? It's hard to stay focused. But there are different kinds of 'manageable'. Working as a team with my husband. Staying in the here and now."

Jessica has always managed to manage it. She credits a supportive family and good daycare for helping ease the anxiety. But "staying in the here and now" cannot be underestimated. When asked what keeps her inspired to continue dancing and creating she says,

Through dance, she processes the very act of being alive, from the mundane to the profound. I think that's what I recognized, but couldn't articulate about Jessica back in 1996 and what is so delightful about her now, whether speaking with her or experiencing her performances. She carries both the mundane and the profound in just about every moment.

As someone striving to stay in the now, for me those moments take on a magical sheen.

I hope you experience this too. 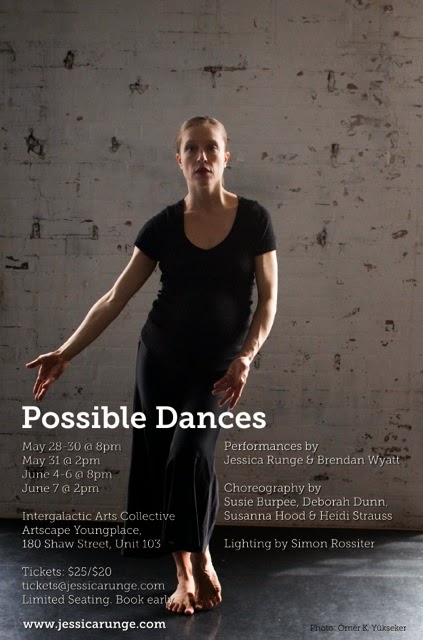