June 07, 2015
With a rush of immersive, augmented, non-traditional, call-it-what-you-will new dance works being staged inventively these days, it has got me thinking a lot about rehearsals.

As dancers we spend a lot of time training our bodies to physically do very specific things and be in the best, most responsive physical shape for the tasks at hand. But when the tasks at hand involve the unpredictability of an audience immersed in your world with no clear separation of stage and witnesses, how do you prepare?

I sat down -- usually that's a cliche in interviewing terms, but we really did sit down in the same room together! -- with Jennifer Robichaud to speak about her site-specific, potently interactive work GRIDLOCK for Larchaud Dance Projects which opens June 11th at the Artscape Youngplace building. The work moves through the building and explores fighting as a physical, mental and energetic theme. 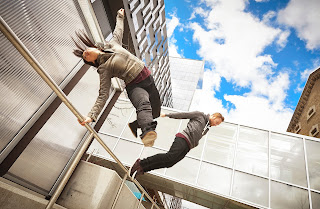 "I've wanted to do a non-traditional production for a while. It has been our thing to take something that starts on the street and put it on the stage, but now we are working with no barrier between us and the audience. The audience is part of the show whether or not they participate in a really active way." says Jennifer.

She describes the experience for the audience as one of choice. There are cues to follow, but audience members are not led through the performance, there is no pressure to be interactive. From the initial idea of fighting in everyday conflicts, GRIDLOCK, by the nature of its staging, embodies conflict at a deeper level than the dynamism of its movement vocabulary. The project aims to involve the audience emotionally through the proximity and barrier-free staging.

"For us the choice to not participate interactively says something about human nature and conflict.  If there is hesitation -- is it the show or the individual's response to conflict?"

And how to you prepare for the myriad responses possible in a work that invites interaction with an audience but does not define what shape those interactions might take?

"It would be hard to get a practice audience that wasn't made up of our friends and colleagues who would probably be more likely to interact with us." Jennifer says.

Dancers would be able to predict audience responses in this situation too. So the team involved in  GRIDLOCK decided to let this be part of the experiment. Dealing with an assortment of responses in a non-traditional performance lies right inside the theme of dealing with human nature and conflict in the moment. 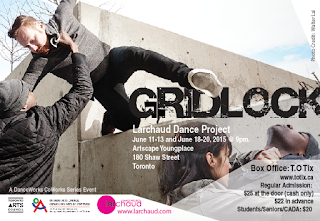 It helps that the entire team is used to working in non-traditional settings. Ryan Lee and Amy Hampton are long-time Larchaud collaborators, as well as being involved in the ambitious Bata Shoe Museum projects staged by Anandam Dancetheatre.  Larchaud choreographers Jase Cozmic and Jennifer Robichaud and dancer Patrizia Ferlisi have performed in a variety of venues.

New to the choreographic team is Raoul Wilke, of Moonrunners dance crew, and master of many street styles. Also new to the team is contemporary dancer Jesse Dell as outside eye, taking over for Marie France Forcier who took leave of the project when she had her baby.

"Having both of them turned out well. Marie France really looked at the subject matter as outside eye, Jesse has looked at choreographic structure. "

Larchaud Dance Project's cast trained in parkour in order to get comfortable with using their environment fully. "We're not necessarily doing parkour but learning the techniques helped us gain strength to experiment and push our movement further."  This added confidence resulted in getting so tight in the choreography that it stopped having the feel and look of a fight.

"We hired stage combat expert Paul Stafford to help us get the fight back in there."

The choreographic process is admirably integrated and democratic. All three choreographers (Cozmic, Robichaud and Wilke) choreographed material and integrated it together. There were specific limitations or restrictions bestowed upon each choreographer, and different sections reiterate and supplant movement material from other parts. Woven into this fabric are the dancers' thoughts and physical impulses to make something personal yet embodying the collective vision.

"The dancers were very honest when the choreography wasn't feeling right. They'd say 'I wouldn't react this way'." So the choreography became more realistic based on dancers' understanding of their own tendencies in conflicts.

This is one of the first Larchaud shows that doesn't have a story. There's a narrative and a sense of character for each dancer, but no plot, making the individual dancers' relation to the movement and the theme more vital and also accessible. All part of stripping away the divide between performance and everyday human nature which is part of GRIDLOCK's aim.

Immersive performances for dancers and audience alike is heightened reality. It stylizes or frames what daily interactions are all about. And site-specific, environmental, immersive or augmented settings can create the potential for deeper, more direct connections once we're all back in more traditional theatres. Our sensitivities are attuned and vivid, open.

In site-specific and interactive works we see each other seeing each other. And when you look into someone's eyes you have the chance to feel what it's like to stand in their shoes. 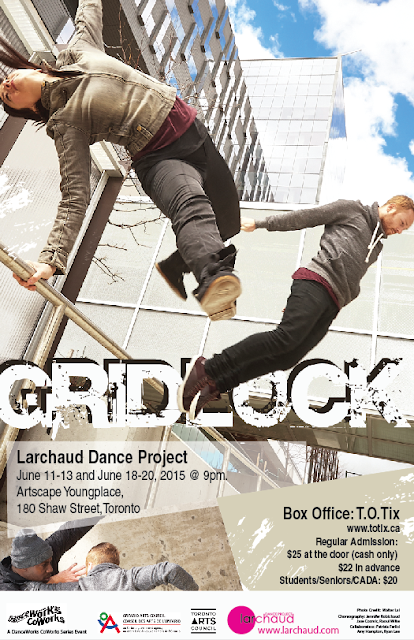