Do you know?.....The spectacular Sharon Moore

July 26, 2015
Whether I'm writing an article or interview that I sought out, or whether I'm writing for an organization to cover and celebrate their artists and accomplishments, my starting place is curiosity, always fuelled by a gut emotional response to the artists and the work. As a dancer, as a choreographer and here too I function with my heart on my sleeve. When I was younger I found this hard to reconcile with the world, but more recently I've grown happy to live this way.
This interview has a deep root in me and the maintenance of the heart-on-sleeve quality to my work. Sharon Moore has been close to my heart since 1998 when I was struggling to understand my place in the dance world. I remember sitting with her in the dressing rooms of the Winchester Street Theatre and randomly striking up a conversation with this beautiful stranger while we stretched...I don't even remember what we were getting ready for...but I remember her kindness and encouragement, she probably didn't realize how much that one conversation meant to me. (I hope she does now). It was pivotal. Now that I have known her for over a decade -- nearly two, eek! -- it is a great pleasure to offer you this little Q & A about Sharon's path in dance and her latest spectacular creation which took place at Nathan Phillips Square this weekend. 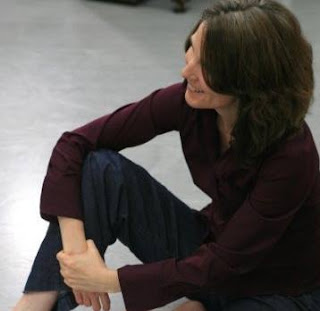 LR: What was your path from contemporary dancer to choreographer of spectacle performances?
SM: When I was super young I wanted to be a painter. I had the idea that I could write in the sky with colour and light. As I grew and studied about the masters in school I was extremely attracted to large works about life and spirituality. The motion in Michael Angelo's Cistine Chapel or the work of Marc Chagall for instance. I love the combination of classical form or story in combination with the unexpected, the twists and turns of complex motion.
As for dancer to choreographer of spectacle performances - I am always drawn to dancing work that has twists and turns and complex motion and a touchstone of story however hard lined or not that might be. As soon as I began dancing I began choreographing...the two actions seemed to be the correct balance for me. I always saw choreographic ideas in a large landscape in my mind...My works have always contained a specific sense of character, era, atmosphere and fantastical qualities. Even if I didn't achieve it I was always striving for the creation of another world, complete in all its content, logic and innate purpose.
When I began to choreograph some of my early works were site specific, and I loved transforming wide landscapes into performance spaces. I got to try my hand at making contemporary theatrical circus with my creative partner Derek Aasland. Simultaneously we also dove in to the world of movement design for feature film, where we created worlds for such film series as Resident Evil. This work in cinema involved massive scenes and working directorially with the directors.
Derek has had a significant impact on my work as a dramaturge and director and together we have developed a way to write narratively a script before we even enter the studio. We find this essential in making large scale work; circus, dance, theatre and site-specific pieces.
LR: How did you develop the idea for the Pan Am Games spectacle "The Thirst for Love and Water"?
SM: I have been making circus, dance and theatre director/composer/dramaturge Derek Aasland. We have been developing, creating, presenting and fusing disciplines since 2004.
Don Shipley Creative Director of the Arts and Culture of the Pan Am Games saw our Circus show Le Vie En Swing at La TOHU for L'ecole Nationale de Cirque in 2013. Don asked us to pitch some show ideas for his Aqua-Culture theme for Pan Am. As it turned out he asked if we could bring together the ideas from the 4th and 5th show pitches and The Thirst for Love and Water was born. The piece brings together a mixed cast of acrobats, dancers and aerial choreography. 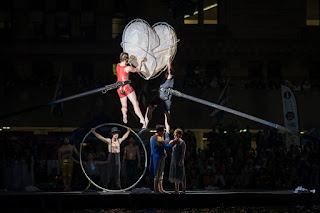 Once we had the show concept, we began to create the narrative. There have been many drafts of that narrative, always evolving and expanding.
As our cast firmed up we went back to the story and tweaked the story-line. Rehearsals began late May 2015.
The rehearsals involved 2 cast teams; the dancers and acrobats and the aerial team. On week 5 we brought the two groups together, having worked on the same story-line in two separate rehearsals. We basically made the show from beginning to end in two separate places, and then merged those materials into one cohesive story.
This show was particularly challenging as no matter how big our rehearsal studios got, nothing was as big as that pool at 100 ft x 200 ft. We plotted and planned for every possibility that could happen in the transference of the piece from studio to stage. 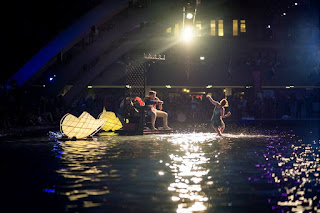 That extreme detail allowed us to place the work in the pond successfully with a very limited tech schedule at the reflecting pool. Dancing in water and on stage along with aerial units that wield 1000 pounds in weight (although perfectly safe), take some control. You must thoroughly control the rehearsal environment at all times, with such activity going on. Once we were at the pond, since we had prepared so well, there was a certain freedom felt. 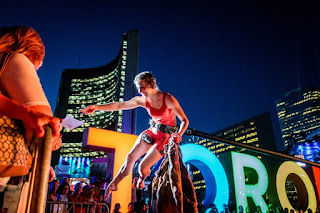 LR: How do you select/audition performers? What are you drawn to for the big scale works and the smaller scale works you make?
SM: Auditioning is one of our favourite activities as it allows you to meet and learn about artists you might not know otherwise. We did very extensive auditions for our acrobats, across Canada by video as well as live auditions in Quebec and Toronto.
In terms of the dancers we have a cast of different ages and qualities to accentuate the difference in characters and the times periods they are from.
For any size work I am drawn to the ability to go all the way and beyond emotionally. The ability to not have to hold on and control emotional content, the ability to let it fly, transform, vulnerability, able to turn on a dime emotionally, coupled with a very exacting physical technique. 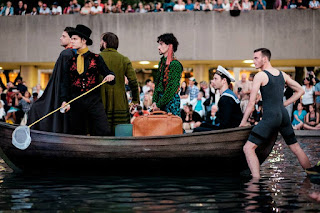 LR: What is your dream project? And....can I be part of it?
SM: Wow! No-one has ever asked me that question before! It would definitely involve a choral work by my creative partner Derek Aasland for 500 voices as the anchor element, 100 dancers, high-wire walkers on a series on criss-crossed lines, an extensive list of props that were handled by both audience and performers. It would take place in a building made mostly of glass and ideally completely see through.

LR: can you tell me about a performance you saw that was a game changer or had a big impact on how you make/conceive your own work?
SM: Seeing HAIR as a young child in Toronto. The show was completely atmospheric, like another world, the performers were so in what they were doing you felt you were them. I saw a lot of theatre when I was young and pretty much no dance.
The more I create the more the lines between disciplines disappear. HAIR for instance simply keeps resonating for days, weeks and years.
It took me on a fantastical journey. It made me see the richness of aligning all the parts of a piece of art toward one goal.
Listening to the album Jesus Christ Super Star when I was 10 gave me a palpable understanding of the balance of intention, emotion and content.
Lastly Sankai Juku at Ryerson Theatre. The performer commitment in the company is intention itself. They are deeply involved in what they are doing and being. Watching a stunning dance between a Peacock and a man was one of the most riveting experiences I have encountered.
Learn more about Sharon, her work and her upcoming events:
http://www.sharonmoore.org/Home.html
photos of "The Thirst for Love and Water" by Jae Yang, all photos courtesy of Sharon Moore