The most beautiful rhinoceros: Jillian Peever

February 22, 2016
Jillian Peever is a rhinoceros. She knows I write this with hoardes of love. She is nothing like a rhinoceros -- a voice like silken gravel, a look like a Scandinavian elf, and a dancing body that can do anything -- but she is a powerhouse, a compact of determination and ferocity.

I was lucky to get to know Jillian when she stepped into Denise Fujiwara's EUNOIA in the 11th hour last fall, as one of the original cast fell ill on tour, and the original understudy was very pregnant. Jillian learned the work on site in Calgary with speed and precision. She was, to me, a rhinoceros: head down, fiercely, quietly getting the work done with impressive power. Rhinos are gorgeous.

I was intimidated by her skills, but mostly inspired by her combination of utter sweetness and total confidence.

And I am so happy to present here an interview with Jillian about her show, opening this week, with choreography by the beautiful Sharon Moore (see earlier interview with Sharon from the summer of 2015). 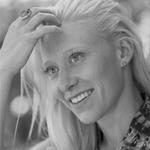 LR: What made you want to take on the solo show, self producing and all?

JP: I wanted to take this on, because it had been an idea of Sharon's for quite sometime. She planted the idea of making a solo show for me years ago. She was bringing me into rehearsals every so often to try new things out for the character.

At some point she made it clear that she really wanted to go ahead with this, and I offered to get the grant application process started. I took 'the bull by the horns' and she supported me every step of the way. She continues to guide me in self-producing.

This will be my last season as an 'emerging dance artist' by CADA (the Canadian Alliance of Dance Artists, Ontario Chapter) definitions; taking on a solo show as an 'emerging artist', at first, I was a bit curious about how it would all turn out--but mostly I was ecstatic to have the opportunity.

I never thought that I couldn't do it. I knew it would be a huge undertaking, but I had confidence in Sharon's work, and with the solo-performance mentorship of Peggy Baker, I knew that this work would be a turning point in my artistic career.

LR: What drew you to Sharon Moore in the first place? What is your history working with her?

JP: Going to the School of Toronto Dance Theatre, working with Sharon is a 'right of passage'. Every first year student gets the experience of dancing in her work. I remember being very shy and unsure of myself in that first creation period with Sharon. I definitely wouldn't have thought, at that point, that this solo project would be in the cards!

I was shy, quiet--but I did work hard, and I do remember throwing myself into some wild movements. I wasn't afraid of a few bruises! At the end of the 3 years of school, Sharon gifted me with a 6 min solo that was mine to perform and use for any opportunities that would support my career. It was here that I really experienced working with her in a one-on-one relationship for the first time. The amount of text she gave me increased, and, for the first time, I fully experienced the physical challenge presented by delivering text with as much intention and detail as her technically and physically demanding movement signature.

The challenge is what drew me to her again and again.

LR: How has the work shifted as it has expanded?

JP: After the first 6 min solo was created (which I remember, really felt like a marathon!), I presented the solo along with some of my former classmates in a production called "Fantasies and Other Poisons". The production involved the stringing together and weaving of 5 solos choreographed by Sharon. This allowed me to see how Mr. Leftovers would interact and corroborate with other characters from Sharon's imagination. A very important step in getting to know someone is seeing how they behave at a family function.

Later that year Sharon invited me to Princeton University to be part of her creative residency there where we continued developing Mr. Leftovers, but also researched ideas for another of Sharon's works. Working with Sharon this closely, and on different material allowed me to see the 'Mr. Leftovers' living within Sharon. We worked together a couple more times in the summers after this, always adding to Mr. Leftovers and each time we added to his history--and to our own.

Now, we are connecting all these little scenes of Mr. Leftovers' life. Connecting them gives each scene a new feeling; exiting one scene and moving directly into the next does something to the atmosphere and emotion that is different than simply starting from the 'top' of the scene.

The use of text has also expanded. Text has become an even more important element. In recent months I've had more opportunities to experience the use of text in performance, and I feel much more equipped. I believe Sharon is aware that I can handle more and she gives me more!

LR: What is your next dream for yourself as a dancer/producer/creator?

JP: I think my next dream will be to fully realize a project I've been exploring in little bits and pieces over the past year I am calling "The End of the Road Project". I hope to spend more time choreographing on others as well as choreographing on myself, and collaborating with artists to bring something together.

I imagine it will end up taking several forms: dance film, site-specific performance, audience-engagement/experimental, and more traditional theatre style performance. Eventually I want to find some beautiful site specific locations across Ontario that will frame a relationship, character, or abstract feeling, possibly stringing them together in an interactive way making use of technology and media. I have some work to do on this yet. Could be a life-long project!

LR: What have you learned along the way of self-producing? What advice would you have for others considering putting themselves out there like that?

JP: First bit of advice is from my logical mind: I would suggest going to the Dance Umbrella of Ontario and asking for advice on how to make your project stronger. I have the drive to get a project going, to get to work on the choreography, to perform it well--to make the artwork-- but what DUO has been able to help me do is make sure that my work gets exposure. The services there are completely tailored to my needs. I am lucky in that I have Sharon as an experienced producer giving me support, but if you don't have that, DUO can help with grant applications, budgeting, contracts, media.

My artistic advice: I've been thinking a lot lately about what I think makes a great performer, a great work of choreography, a great night out to see some theatre. If I were to come see my own show as a member of the audience, what would make it a great experience for me? Thinking in this way allows me to see the challenge I have before me as really important, not just for the audience or choreographer but, for me! I will do my best, I will bring my own ideas and I will do everything in my power to make the night a 'great night' from my perspective! And that's really the best I can do. If I'm happy with it, than I'll know I've done my work.

Personally I would also advise that you just do what you can. Set some goals, do your best to stick to them, but if something doesn't go the way you planned, don't dwell on it. Look ahead to the next thing you can do. Keep a positive mind and be determined that you are 'fighting the good fight' bringing more art to the world in the best way that you know how to! 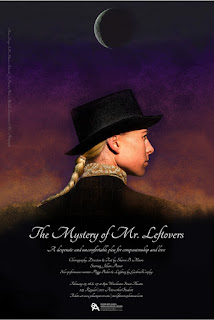