The things we do are funny: Tina Fushell at Summerworks 2016

August 10, 2016
Tina Fushell: funny, unfathomably stylish, sweet and independent. And all these things come through in her dance creations. I was lucky to dance in one of her works in 2007, "Ladies in Waiting" uniting four distinct archetypes/stereotypes of women as wives. I was the mousy librarian-ish (typecasting?!) and although I can't remember much of the choreography now, I remember what a fun time we had in rehearsals and in performances and I remember how interesting it was that Tina could take a single, simple idea and tell a story that did not succumb to cliche or grandiosity. It stayed slightly off-kilter, fun and true to that singular idea.

Tina's work Waving is Funny opens tomorrow night at Summerworks Festival (see end of interview for details). It is a remount of a work she self-produced in 2014. Read on to hear about the process of remounting and the wonderful spirit that is Tina. 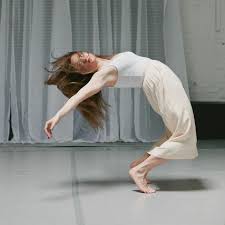 LR: Your works always have this beautiful thing of the “magical mundane” — a Sarah Chase phrase which I adore! — taking a simple idea and expounding it. I think back to that amazing piece that was in The Violet Hour show that we produced eleven years ago (what!?) Do you have a sense of why or how this has developed in your work?

TF: That piece you speak of is called The Things We Do, it was literally about the things we do, i.e brushing our teeth to washing our face. The work I'm showing at Summerworks is called Waving is Funny, again a work about something we all do, waving. I seem to be attracted to the everyday sort of occurrences and actions. I am a people watcher, I often catch myself taking someone in and admiring them from afar. I'm attracted to animated people, to humour, to simplicity. There's that saying art intimating life... I guess that's what I'm doing! 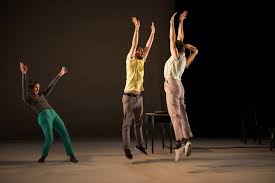 LR: In remounting Waving is Funny, have you found anything new, has it shifted or morphed at all?

TF: The work is getting a little bit of an upgrade. I am working with newer equipment, I'm being more specific in how the set looks, I purchased a trolley with wheels because the last time we presented the work the space we used had a trolley and I liked the look/feel of pushing it around.
I also received some feedback from our last presentation and one of things I took from that feedback was less is more, so rather then going back into the studio and making additions, I've made a couple of edits.
LR: I remember having a conversation with you on the Parliament bus a few years ago about rejecting or at least not relying on the arts council grants path to get your work made and produced….and I think of that conversation a lot, not just in terms of producing with or without a grant, but moreso in being uncompromising with one's vision for the work despite budget, to think more creatively. We are so good at doing that in the studio, in what we call the “creative process" but that conversation with you got me to thinking about the “creative process” of all the non-art-making aspects of making art. It’s still a creative act….I am so grateful for that conversation. In a subtle way, it shifted a lot of things for me.

My view on this has not changed, I am true believer that you can do a lot with a little and I am also stubborn. If I set my mind to something I'll make it happen and that's where creativity definitely comes into play. The first thing I tell myself is I have to be realistic and have realistic expectations, which means you may have to re-think some things. For Waving is Funny I ended up self presenting it in a community centre as oppose to a theatre, I had a stage manager but no lighting designer.

The one thing that never falters is the performers salaries, paying the people that you hire CADA rates is of the utmost importance to me, fundraising certainly helps in making that happen! I also find doing barter exchanges with other artists is very helpful, we have such a rich community here in Toronto and I have found when you give you can also receive. This it what keeps the creative engine of art making going in our city and hooray for that!!!
LR: I experienced that beautiful richness in the community myself when I produced earlier this year. I really felt that "it takes a village" sentiment. It's important for us to help and support each other, not necessarily by being bums in seats. Our work should reach way beyond our peers but I think it's so healthy when we all feel invested in each other's quests. It is so easy to feel isolated but there are so many out there who are ready to lend a hand in all sorts of ways. Once you let yourself ask for help/exchange/barter the possibilities flood in!

Speaking of not being isolated, you are not alone on stage in Waving is Funny. Could you speak a little about the cast? What drew you to Molly and Luke, what inspires you about them, and how do you like dancing in your own work? 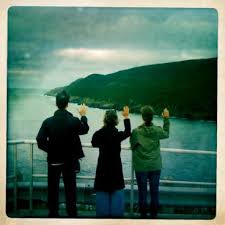 TF: Waving is Funny began as a joke between Molly and I. We were sitting on my sofa saying how funny the action of waving at another person is and how there are so many different ways to wave. We began waving at each other, acting out as many different waves back and forth to each other as we could conjure up. I laughed so hard that afternoon over such a simple thing and it occurred to me right away that this simple concept was the starting point to a dance piece and Molly had to be in it!

Then when I started seriously thinking about it I thought it needed a third person and whoever they are they need to share a similar sense of humour as Molly and I, Luke was the first person I thought of. Luke and Molly are the perfect accomplices in this action, igniting the work with their individuality and further inspiring my motivation in making this work in the first place. I am in this piece because of how it started but also I had never worked with either of them in this capacity and wanted the chance to do so.

LR: What is you dream project? (and can I be in it? I so loved dancing in your work way back when.)

TF: I would love to make a work that allowed me to hire all the people who inspire me and who I love as people and as artists...this cast would be HUGE!!! It would involve  performers from many different backgrounds, it would be collaborative and anyone who is involved whether they are the set designer, performer, or costume designer would be in the room from the beginning offering insight and contributing to the work as it unfolds... an art party, a journey, a celebration!!!

all photos courtesy of Tina Fushell