experimenting, sifting through memory and bravely: Allison Cummings at Summerworks 2016

August 12, 2016
Allison Cummings' work album  -- a collaboration with actor and sound designer Lyon Smith -- is a compare and contrast visit through the memories of Allison's and Lyon's lives. Just writing those words creates a vibrating potency. An album contains captured moments of life, often visual and visceral triggers, for something bigger than the paper or the 0s and 1s that make them up.

There's a trend in the dance contributions of the Summerworks festival this year, undoubtedly shaped by curator Jenn Goodwin, of simple, strong ideas guiding creations. They lead to deeper things, by way of the body not a philosophical, conceptual or technical approach.

Below is a short interview with Allison Cummings, a wry, passionate, uncompromising woman who surprises with each performance work she makes. Her show opens THIS AFTERNOON at 2pm. Go see it and be moved. 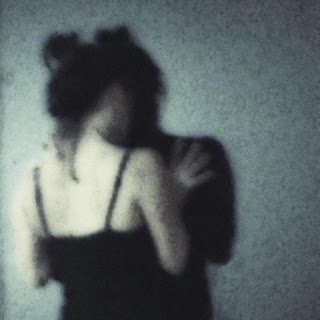 LR: OK, so the obvious but important question is what triggered the creation of this work? What started the ball rolling on “album”?
AC: When Lyon and I first started talking about creating a duet together, we were initially inspired to include Lyon’s growing love and practise of photography. He has always collaborated with me as a sound designer and we thought it would be interesting to shift our usual dynamic by focusing on these specific skills of his.

Originally it was going to be less personal, more about an exploration of the act of capturing moments, and how these moments that have been captured are remembered in a somewhat idealized way.

We were always interested in dissecting our own photo albums as part of the process, but more as a way to create material.

But then on Feb. 25th this year, I lost my home and all my belongings in a fire. Our conversations changed after that, and the process became the material.

LR: I can imagine that would change a lot of conversations. And when people speak of losing things to a fire, so often it is the loss of photo albums that is most devastating. It goes without saying that the entire dance and theatre communities are so very glad that you and your son are safe after the fire.....

The last few works you’ve made you have not performed in--correct me if I am wrong. It seems absolutely necessary that it be you performing this one…although that leads me to a sub-question who would play you in a movie/dance of your life?… my main question is how does it feel to be performing?  AC: I am performing in this piece and yes, it is crucial that it is me. Lyon is also performing and the same goes for him. Hmmm…. who would play me? Hopefully someone with a sense of humour….

Truth be told, I am terrified to perform. However the nature of this piece is casual, more like a live conversation unfolding or intimate sharing of memory with its triumphs and vulnerabilities. That in itself is scary as there will be no “choreography” to remember. Our process has only entailed long conversations about our lives. The piece will begin to be made once we enter the space the day before we open the show.

As a choreographer setting work on others, I am able to create the vision outside of myself, this is satisfying for me as a process because I can see what is and what is not working, I can trust my collaborators to suggest paths and in the end I can detail and hone the work as I see fit. Creating a piece like this, I have no outside viewpoint and no clear idea if its going to work. So its pretty unsettling. But maybe that’s exciting too.

LR: Can you share a bit about what are those landmark moments of comparison in the work?
AC: Lyon and I are two days apart and both grew up in Ontario. We both went to post secondary theatre / dance training, we both work in the arts, we are both parents, we both have had relationship struggles and break-ups.

However, we have chosen very different paths and if we parallel our lives through ages together they veer off incredibly, yet, here we are at this age in this room doing the same thing, together.

In our conversations, we both discovered these vast oppositions in our whereabouts and priorities from age to age. It opened a space to deepen our understanding of true individuality in each other and then beyond us, the various characters that show up in our archives, memories and photographs. 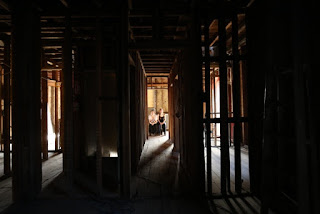 photo of Lyon Smith and Allison Cummings by Nannes Springer

LR: Are the visual records of your histories and memories physically part of the show, do they appear in their original form, abstracted, embodied?
AC: Yes, there will be photographs in the space.
Some will be dealt with hands on. Some through abstraction and some not at all.
There will be dancing.

LR: I feel that your work is always highly personal, but not necessarily transparently autobiographic— how do you prepare or approach this kind of transparency in “album”? For instance you have literally been sharing old photos and memories on Facebook leading up to the Festival. AC: This is scary for me… I am more inclined to hide behind theatrics, language and clear choreography.

This will be very different. This will be raw, constantly changing throughout the run and unpredictable.

Lyon and I will veer off from each other, but hopefully still end up in the same place at the end.

LR:  Can you tell me a bit about your history with Lyon Smith?
AC: Lyon and I met while doing the Rhubarb Festival at Buddies in Bad Times in probably around 1998. He was acting in a show for Rebecca Brown and I was playing “Cow” in Gil Garrett’s “Severe Blow to the Head”.

That’s a long time ago. We always admired each other's work and became part of the same young theatre scene that started our careers in the festivals in Toronto: Rhubarb, SummerWorks, Fringe, etc.

We started really collaborating in 2008 when he volunteered to create composition for a piece I was doing for the School of Toronto Dance Theatre.

There’s an urgency and unpredictability to Lyon’s soundscape that really compliments my need for detailed precision and dark matter subject lines.

We both delight in finding beauty in the underbelly, release in confusion and have an understanding of the poetry that can be found in those moments that are designed to unsettle.

We have also become great friends which has laid the foundation for this particular experiment.