Talking about shifting, opening and challenging with Brandy Leary on Contemporaneity 1.0

October 09, 2017
Below is an interview with the indefatigable Brandy Leary.  Just read it. It's a good conversation...

LR: So Contemporaneity…. I love the word, it has a kind of inclusivity within it. It makes me think of something that I believe Bill T. Jones -- although it may have been someone else -- said about the definition of “contemporary dance” that it’s not a technique, style or aesthetic but a way of approaching art making, and that it encompasses a broad world view, an understanding and curiosity about many things from many places. You are looking at a particular kind of inclusion with this presenting series. How did this curatorial view and Contemporaneity come to be?

BL: Part of the thinking around Contemporaneity emerged from Ananadam Dance Theatre's Body Brake series, which we produce in partnership with Theatre Passe Muraille.  I collaborate with a number of performance communities in Toronto through my own work and that of Anandam Dance, and they break down into three distinct categories; Indian dance, contemporary circus and dance practices descended from Contemporary Euro/white North American traditions.

Because of this exchange, new relationships and curiosities spiralled out to other incredible practices and artists; jazz, tap, urban, burlesque, bondage and performance art, poetry - forms originating in different aesthetic and cultural viewpoints, the political body, the ritual body, body as a form of resistance.  In curating Body Brake I was interested in dissonance; can we hold more, can we be with the dancing body in many different ways, can we dive deeper than a form to offer what is operating underneath, to what is being transmitted between performers and audiences.  Can we also unsettle theatre spaces; push past the cultural architectures of our infrastructure that were built in a certain time to stream performance through an essentially dominant way of relating to performance; in variations of a proscenium relationship.

Contemporaneity developed in collaboration with the series Co-curator Soraya Peerbaye.  Candid discussions about power in our field, about the bodies and histories in that structure and the kind of implicit and explicit implication that the “contemporary” in dance belonged to Euro/North American concert style dance practices and that the rest of the work gets referred to as “other”, “ethnic”, “culturally diverse”.

Discussions of looking at state, ritual, pourous audience relationships, different spatial organizations for performances, various levels of participation and duration as places of research that unfold in multiple ways from different practices were of great interest to us.  Essentially, we are asking: how can we hold more curiosity about the dancing body in the world at this moment, particularly in this raw and tender moment of unsettledness.

LR: You have already spoken a little about this, but how does this series align with Anandam Dance’s creative projects?

BL: Anandam works in a various scopes and scales; large 75-person cast in 12-hour long pieces, smaller works that seek to unsettle theatrical spaces and most practiced audience performer customs, a committed interest to different sensations of time and slowing down and a push against dance as an ephemeral experience.

Over the years our work has become explicitly more nuanced in its politics and analysis. My artistic curiosities are concerned with entanglements of bodies and landscapes and power.  I investigate, processes of colonial contact/settlement, climate disruption, exploitative and extractive economic systems, , the attempted genocide of Indigenous peoples, as inter-related actions that have re-shaped who we are and how we live.

Currently I am working with the concept of “Great Grief”, a term proposed by Norwegian eco-scientist Per Epsen Stoknes. This “Great Grief” refers to the paradoxical experience of living with disappearance, knowing that we ourselves are part of this process. We are collectively, but differently, mourning and reconciling our histories, our present and potential. In this period I am curious about the ways we can soften and open.  These elements are threaded through Contemporaneity, as we connect and expand in dialogue and community.

LR: I was just talking with Michael Caldwell a couple of weeks ago and we had a lengthy chat about how working with you through Anandam Dance processes and performances organically shifted and grew our thoughts on performance. I noticed after working with you that, without trying or planning to, my way of conceiving my own work, staging it in particular, had changed, I just saw new ways of putting it all together that served the work and its potential audiences better and more imaginatively…..I’m rambling but perhaps I’ll get to the heart of it if i keep going….I think it was your talent for framing a performance for its witnesses and participants that seeded in me and helped me evolve. Do you have a sense of where you talent for this “framing” came from? because i think that is what is happening with Contemporaneity too, through curation rather than staging….

BL: For me the framing comes from growing up artistically outside the practices of Euro/North American dance structures and institutions. My 20-30’s (and still to the present day)  were spent living in India, learning dance (Chhau), and martial arts (Kalari), and witnessing vast amounts of performance that I was totally unfamiliar with.  At the age of 21 I saw rituals where the performers went into trance, channeled deities and ancestral spirits, predicted the future, walked on fire. Durational performances, often in a found or made site where the lines between pedestrian and ritual states were woven together, moving between these thresholds with ease.  It was deeply impactful for me to see that the body and performance held much more capacity than I had ever seen or imagined.

I saw a huge amount of traditional works as well as contemporary ones.  As I witnessed, I did not do a translation or try to parallel the experiences to what might be familiar, I stayed in the sensation of being there, being with what I didn’t know, tracking how my body responded to the different sounds, movements, energies, scents; feeling the process of transmission in the thickening space between the performers and myself in the audience.

It was through these experiences I understood that being with art, with performance, is a creative act.  It is a creative practice, and at the base of it is curiosity. If we examine curiosity as a skill, as something that can be practiced, expanded and exercised then we have the potential to open further into more nuanced possibilities in our experiences of performance and the multiple ways we can respond and make meaning through them.

This experience molded much of my artistic interests; the radicality and potential of the dancing body, curiosity as a skill for creation, curation, and witnessing; working with both these elements to open larger spheres of consideration, discourse and analysis that can come from more than a single cultural lens in the field.

LR: What is your favourite aspect of curating/presenting?

BL: For Contemporaneity, the shared curatorial model between Soraya and myself feels vital, generous and generative.  It is a challenging project for the sector we know.  It asks for a lot of reflection from institutions that are opening to different ways of thinking, doing, making and decoding meaning through the dancing body, and that is exciting.  It is asking the sector to have different aesthetic of care as it unfolds.  It asks us to hold what we don’t know and what we may want to unknow. It is supporting different critics, discourses and conversations.  It is asking for alternative power structures by centering a different dialogue and asking for listening in the process.  It is touching all the tender places, the hard places, the resistant places and this feels necessary. Esie Mensah, Mafa Makhubalo and Diana Lopez are our first supported artists and they are brilliant; intelligent, skilled, political and nuanced in every way. It is an honour to collaborate with them.

As Brandy said, there are many aspects of this series, check out any and all it, you will be  glad you did. 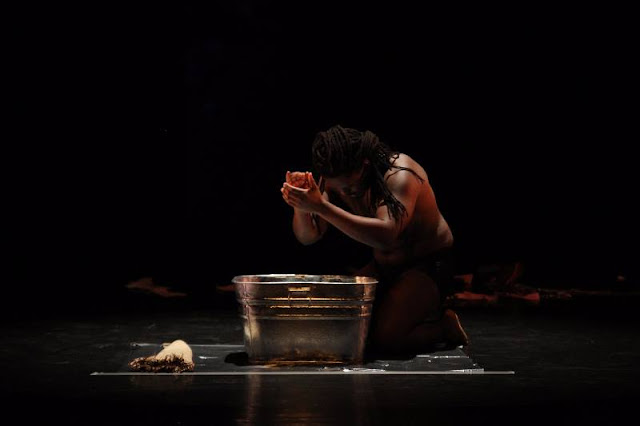