March 14, 2017
When I got the email invitation to cover Carmen Romero's upcoming show (opening March 16th at Theatre Centre), I was excited. I have seen Carmen perform only a handful of times over my 20 years in Toronto, but I remember each time clearly. I remember seeing her at Dusk Dances with my son -- his first encounter with flamenco -- and could feel his startled excitement as well as her ferocious femininity in the open air.  Unforgettable. 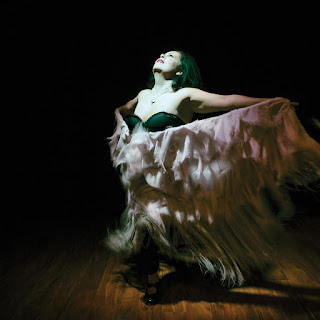 I jumped at the chance to visit a rehearsal. Because I'm a bit of a creative process nerd and I love (LOVE) coming in to rehearsals and witnessing how people work, probably because I've been a loner a lot of my life. And because I am so intrigued by the story behind Carmen's show, Jacinto.

According to Camen, "I had been working on a project that involved the theme of Tragedy.  In flamenco dance we interpret song. There are three divisions or categories of flamenco which are: Cante Chico or Festeros (Small song/Festive), Cante Intermedio (intermediate song-happy/sad)  and Cante Jondo/ deep song, the most tragic in sentiment and theme.    In our project we were working on the theme of tragedy and exploring the sentiment, music and structure and then my father died, suddenly on a flight from Spain to the Dominican Republic."

Carmen had to suspend her creative and teaching project to retrieve her father's remains and go through all the logistics that surround the death of a parent. To add to the tumult, there was no will or written directive left by her father.

"My brother and I were at a loss as to what to do.  So we had to go through all of his belongings to find out banking information, employers, doctors."

The show mirrors this process, in three main parts. The first deals with the actual death, the shock, denial and acceptance. The second part, the part they were rehearsing when I visited the studio, deals with the man Carmen and her brother did not know.

"...the secrets, the people who came out of the woodworks, describing to us a man we did not know.  Questions of who is he? How did I become the person I am? Why did this happen? Are we safe?"

In the rehearsal I experience a curious reversal of illusions. Quite often when we see great performances, a few performers on stage manage to conjure up more characters and energies that are actually there.  This portion of Jacinto did, for me, the opposite. In the most potent way possible, the other performers became projections of  Carmen's mind or Carmen's character's mind. Disembodied ghosts, memories or embodied emotions.

This is by no means a slight to the ensemble working with Carmen, quite the opposite. They are a fantastic group of musicians who are so much more than accompaniment. Collaborator and singer Stephanie Pedraza says of the show "By the end of it, it's like we've all been through a war." They are deeply invested and involved in every theatrical aspect.

Honey-voiced director Karin Randoja gives small thoughts as they run this difficult second section. In some situations this might be distracting for the performers, but this team seems to sub-consciously absorb each thought Karin offers them. It's a gentle process, but Karin's ideas are not without power. She sees opportunities and connections between each and all of them.

Carmen describes the challenges of Act Two (they refer to the work in Acts but there's a fluidity to the boundaries between each): "This section is difficult and stressful. Our cast has to concentrate deeply to get through it with out getting lost in the emotion. Originally the show ended in the second section, however, once done, I realized, that my father's spirit was still with me."

The result of this realization: they applied for more funding, postponing production until they had the chance for more development and the creation of Act Three: Absolution.

"This is a soulful, beautiful dance that lets us all let go." Carmen says. "While this production is informed with my personal story, the theme of the production tells the universal story of loss.  My  intent and message are clear. I am the muse for which people can explore this difficult experience safely and my message is that we must carry on."

There is a lot of laughter and teasing each other as the ensemble gets prepares to run the challenging Act II again. They are attentive to details they must remember, but never without masses of humour.

How do you prepare for a show such as this, one that is so personal and yet with the goal of transcending that personal tragedy and confusion. I ask Carmen what her last moments before beginning a performance are like.

"Just before going on stage I always lead a non-denominational prayer.  I ask that we all hold hands and I thank my collaborators for coming together and dedicating their time and effort to the show.  Then when I'm alone and about to go on. I say my own prayer of thanks and asking for support.  I connect with my energy source and I enter a different state of mind."

You can feel it. Carmen transforms from the inside out. The feeling that surges inside shifts the shape of her face, the line of her shoulders, the way she breathes. I am so excited to see this show with lights and projections and full sound and costume, all within the intimate space of Theatre Centre, where the boundary between audience and performer is similar to the rehearsal hall. Even in the back row at Theatre Centre, you can feel the inner world of the performer.

And with Carmen Romero on stage, you will want to feel it. 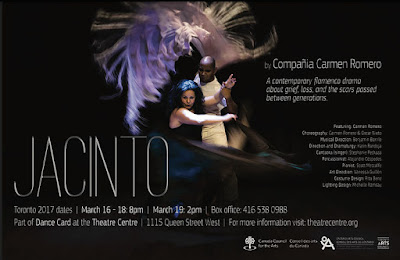 www.theatrecentre.org for more info and tickets