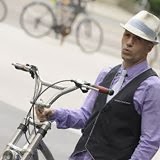 Miko Sobreira is an impressive force in Toronto: performing, presenting a series in his home, teaching salsa at Lula Lounge and to youth, guiding troubled youth and inventing new ways to reach and interest them, and as a human hub that brings great and diverse people together.

Born in Venezuela and trained originally in theatre, Miko has worked with Moonhorse Dance Theatre and Rubberbandance  among many others. He created a raw and ferocious performance with Rebecca Hope Terry and Sasha Ivanochko in Fujiwara Dance Inventions' No Exit, choreographed by Denise Fujiwara.

What were your first impressions about EUNOIA the poem and the dance project when you first got involved in Denise's process?


This sickish mind! (I'm talking about both Denise and Christian!)

Based on my theatrical background, I've been always attracted by challenging artists that never settle for the obvious, and in this particular opportunity, I was presented with the rare equation of fulfilling my attraction by two artists of this kind.

It is very clear to me why Denise would be inspired by Christian's book, and also why it makes so much sense: their non-sense approach.

Removing the self that I knew so far as myself, while redefining me without making it as a formula, instead as a constant transformation!

Every time that I revisit a poem from the book, it becomes a brand new poem; however from the ones that I had the luxury to work on [textually] 'Cold storm fronts' has a deep impact on me, as well as for the work that my peers do while I'm delivering it.

what has been your relationship or experience with words-and-dance in the past?

I was originally a Comedia del Arte performer, a physical type of theatre, that very much embodies the essence of languages through movement.

I studied and worked with Hugo Marquez for ten years; one of the most well known masters and directors of this field from South America.

How do you think the 4 year process of Eunoia will inform or influence your own work in the future?

Immensely, not only on my work, even in a personal level.  The transformation that I have embraced in my private life, it is directly affected by this process.